If your business is improperly treating workers as self-employed—that is, as independent contractors—expect trouble if the IRS calls. The IRS has the power to change the classification of any worker, with expensive consequences for the business owner.

By calling workers “independent contractors,” business owners avoid burdensome tax reporting, bookkeeping, and withholding taxes from their workers’ paychecks. Moreover, entrepreneurs dodge the tax expense of matching employees’ FICA contributions and paying the unemployment tax. The tax savings and reduced paperwork of improperly calling employees independent contractors can be significant—unless you get caught. Violators can be penalized up to 35% of the payments made to the wrongly classified worker, plus interest.

If the IRS finds that you failed to issue a Form 1099, you may be hit with a separate penalty. (Internal Revenue Code § 3509.) Plus, it bolsters the IRS’s case that you misclassified the worker.

Misclassification of independent contractors is an IRS priority. The IRS has targeted for audit businesses suspected of wrongly classifying workers, such as building contractors, medical professionals, graphic designers, and neighborhood beauty shops, to name a few.

IRS and state auditors can assess an employer not only the payroll taxes that should have been collected and paid, but also the reclassified employee’s unpaid income taxes. And as the penalties and interest mount, businesses can receive audit bills of 50% or more of wages paid. For example, if you paid Millie Ways, an employee, $20,000 as an independent contractor, the IRS might hit you with $10,000 in taxes, penalties, and interest for the misclassification.

How to Classify a Worker

To determine worker classification from the IRS point of view, see Form SS-8, Determination of Employee Work Status for Purposes of Federal Employment Taxes and Income Tax Withholding. (See the IRS’s website at www.irs.gov ) Here is a summary of the SS-8 factors, gleaned mostly from court decisions.

Factors Tending to Show the Worker Is an Independent Contractor

People Who Are Automatically Employees by Law

In most situations, the status of a worker is determined by the above-listed factors. Certain workers fall into special tax categories, and the usual IRS criteria don’t apply. Workers who are automatically employees include:

The tax code states that licensed real estate agents and door-to-door salespeople are tax-classified as non-employees or exempt employees. They may be treated as regular employees for non-tax purposes, however, such as liability insurance and workers’ compensation.

Sole proprietors or partners in their own business are neither employees nor independent contractors. They pay their own income tax and Social Security/Medicare self-employment tax. But a shareholder in his incorporated business is legally an employee of his corporation in most cases

How Independent Contractor Rules Are Applied

Let’s look at two workers—one an employee and the other an independent contractor—who provide similar services but fall into different tax classification categories.

State Rules May Be Different IRS classification rules are similar to those of most states for state taxes and unemployment rules, but there are differences. For example, in California, a person working for a licensed contractor who performs services requiring certain state licenses is classified as an employee unless he, too, has a valid contractor’s license. If you plan to hire independent contractors, check the law in your state to see if there are special rules in effect.

Wendy Wordsmith teaches marketing at a community college. Wendy also works part-time for ABC Enterprises writing ads, catalogs, and consumer information leaflets. Wendy works every Wednesday at ABC’s offices, receiving a $200 salary each week. Wendy receives direct supervision and instructions from the owner. Wendy occasionally does some work at home when required to by ABC and is not allowed to do this kind of writing for anyone else. Wendy is an employee of both ABC Enterprises and the college.

XYZ Distributors has similar needs for writing on an occasional basis. But when XYZ needs a newspaper ad or catalog produced, it calls upon Frank Freelance. Frank always works out of his home and frequently hires assistants whom he pays directly. Frank pays all his own expenses. Each time he completes a job for XYZ, he sends the company an invoice. Frank is not prohibited from writing ads for other businesses. He clearly is an independent contractor and not an employee of XYZ.

ffJohn operates a desktop publishing shop specializing in writing and designing brochures, flyers, and other promotional materials for small businesses. At the start, John does most of the work himself, turning any overload over to others, including Sue, Ted, and Ellen, all working out of their homes. John collects from the customer and pays these people as independent contractors. So far, so good. But as John’s business grows, he brings Sue, Ted, and Ellen into his office to work part-time under his broad supervision, an average of about one or two days per week each. The rest of the time they work for themselves. John continues to treat them as independent contractors. By law, he shouldn’t. If he continues along this line, he’s tempting fate—and the IRS. John is exercising significant control over these workers and using their services in-house on a regular basis. Under the IRS guidelines, they are all employees, even if they are regularly employed elsewhere.

How Business Owners Can Protect Themselves

Here’s how to prove a worker was an independent contractor if you are audited:

The IRS invites businesses or workers to submit Form SS-8 for an IRS analysis of whether or not a particular worker qualifies as an independent contractor. I don’t suggest using this form because it will alert the IRS to the issue. Instead, consult a tax professional. 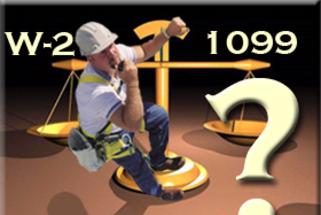